September 14, 2015 – An iron cross provided by the university that historians believe came over to Maryland from England with the first settlers in 1634, will be used in Pope Francis’ first Mass in the United States. 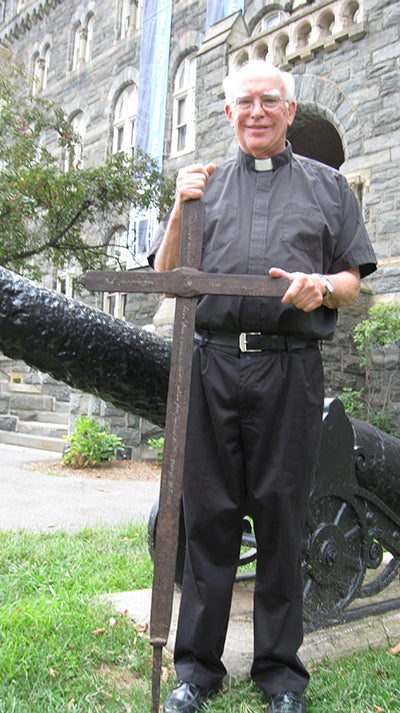 The pope is scheduled to celebrate Mass at the Basilica of the National Shrine of the Immaculate Conception on Sept. 23 at 4:15 p.m.

“It is an immense honor that Pope Francis, the first Jesuit pope, will use Georgetown’s iron cross in his Mass at the Basilica next week during his first visit to the United States,” says Rev. G. Ronald Murphy, S.J., a German department professor. “The cross was more than likely the one used in the first Catholic Mass on English-speaking American soil, and so represents the freedom of religion upon which this country was built, later echoed by Georgetown’s invitation to educate students of all faiths from its beginnings in 1789.”

The nearly four feet tall cross has a complicated, and some would say, providential history.

In 1989, when Murphy was rector of the Jesuit community at Georgetown, he took a side trip coming back from New Jersey along Maryland’s Eastern shore. He saw a sign for Bohemia Manor and followed it because he knew that was where John Carroll, Georgetown’s founder, went to school.

While the school was long gone, there was a stone cairn with a cross on top of it. A plaque said it was a replica of the iron cross brought over with The Ark and The Dove, the two ships that settlers, including Jesuits, sailed from England to St. Clement’s Island in Maryland.

“I thought, ‘Where is the original?’ Murphy says, “and sure enough the sign also said the original is at Georgetown University.”

The longtime professor, who had never heard of the cross, looked high and low with the university archivist. Finally, in the south tower of the Healy building he literally tripped over a wooden pallet to which the cross was attached.

Since it was rediscovered, the hammer-welded cross made from ship’s iron has hung in the university’s Dahlgren Chapel, except during a recent renovation/restoration project.

Its vertical inscription says, “This cross is said to have been brought by the first settlers from England to St. Mary’s.”

The horizontal Latin inscription says “Ad perpetuam rei memoriam,” or “For the eternal memory of this event.” 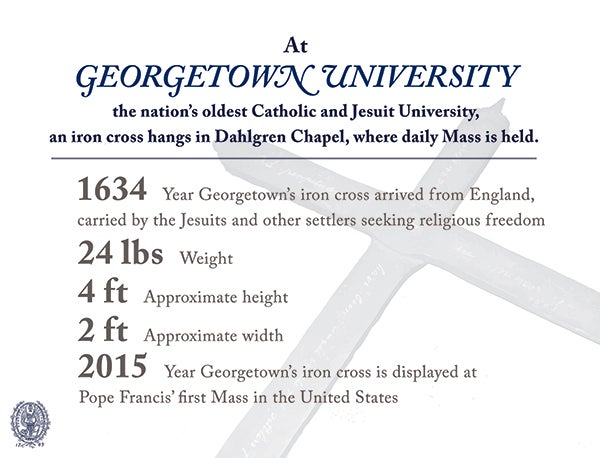 “This cross from England was the cross erected over the first Catholic school in the 13 colonies, at St. Mary’s in Maryland, then at the school at Bohemia Manor, and finally at the first Catholic university in the English New World, Georgetown University,” Murphy notes.

The cross was carefully removed this past Thursday from Dahlgren Chapel and delivered to the Basilica by Jim Wickman, director of music, liturgy and Catholic life for Georgetown’s Campus Ministry office, and three students.

A Part of Us 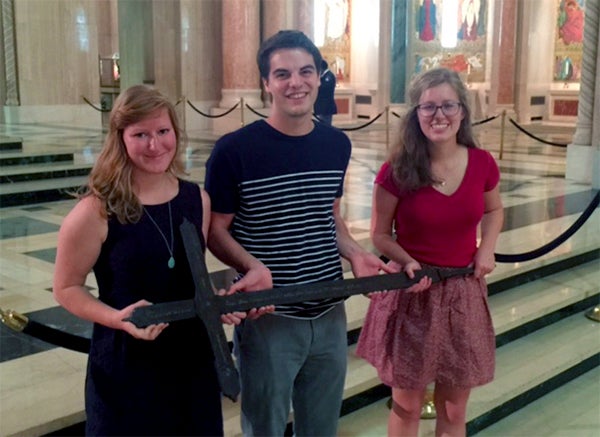 “As a student who prays at Dahlgren Chapel with this cross, I feel like there’s a part of us [that will be] here at the Mass with the Holy Father, and I’m very excited about it,” said Francesca Vullo (C’16), psychology major, Catholic studies minor from Bay Shore, New York.

The cross will be incorporated into the ambo, a stand from which scripture will be read, that was specifically designed and built for the Sept. 23 Mass.

Leonard Calvert, who became the first colonial governor of the Province of Maryland, led the first settlers that arrived in that state in the 17th century. Those that survived the trip purchased land from the Yaocomico tribe and founded St. Mary’s City. 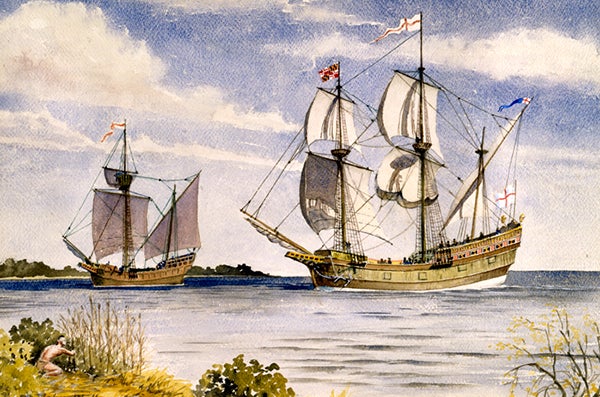 Courtesy of the Maryland Historical Society.

Three Jesuits whose names are very familiar to the Georgetown community were passengers on The Ark and The Dove, which left England in 1633 and landed in Maryland on March 25, 1634.

“…entering the Chesapeake Bay, we turned our course to the north to reach the Potomack River,” wrote White, who kept a journal of the trip. “…Having now arrived at the wished-for country. Never had I beheld a larger or more beautiful river. The Thames seems a mere rivulet in comparison…”

White was said to have celebrated the first Mass in the English-speaking colonies.

“We thought it was a wonderful connection on so many levels, with Georgetown and the Jesuits, to have this cross included within the sanctuary for the Mass,” said Jane Belford, (L’78), chair of the Archdiocese of Washington’s planning committee for the pope’s visit, in a recent press conference. “We have after all a Jesuit pope, and this is his first Mass, in the Archdiocese of Washington, not unlike Father Andrew White. It’s a very special connection with the Jesuits and Georgetown and especially for the Archdiocese very meaningful because it was first Mass and the beginning of establishment of religious freedom in our country.”

The story published September 18th about Georgetown University, Father Murphy and the Iron Cross in the Washington Post can be found here.